Nelson Carvalho, an associate of the Alison Brooks Architects office in London, is a guest speaker at RIFF 2017 Bucharest, the SHARE Forum event of this autumn. He will be attending the two-day conference on 6-7 November at the JW Marriott Grand Hotel to give a lecture on the Ely Court Residential Development, one of the Mies van der Rohe 2017 Awards finalist projects. This is a 44-dwelling ensemble within the South Kilburn Estate Regeneration Masterplan in the London Borough of Brent which forms part of Phase 1 of the Regeneration Programme implemented for the area.

“The council acquired all the properties in the area and then embarked on a very ambitious regeneration project. Probably towards the late ‘80s some of the social problems started to creep in the neighborhood in the sense that what we’ve created here was more an inward-looking community. Nobody came on the estate unless he lived here or came to it by accident. We learned from the ‘60s estate building experience that we need to trunk it up, to look at it in small projects. So, we broke this up in a number of phases, aiming to learn from those phases. The regeneration doesn’t create an estate, it creates a collection of projects, a collection of places.” 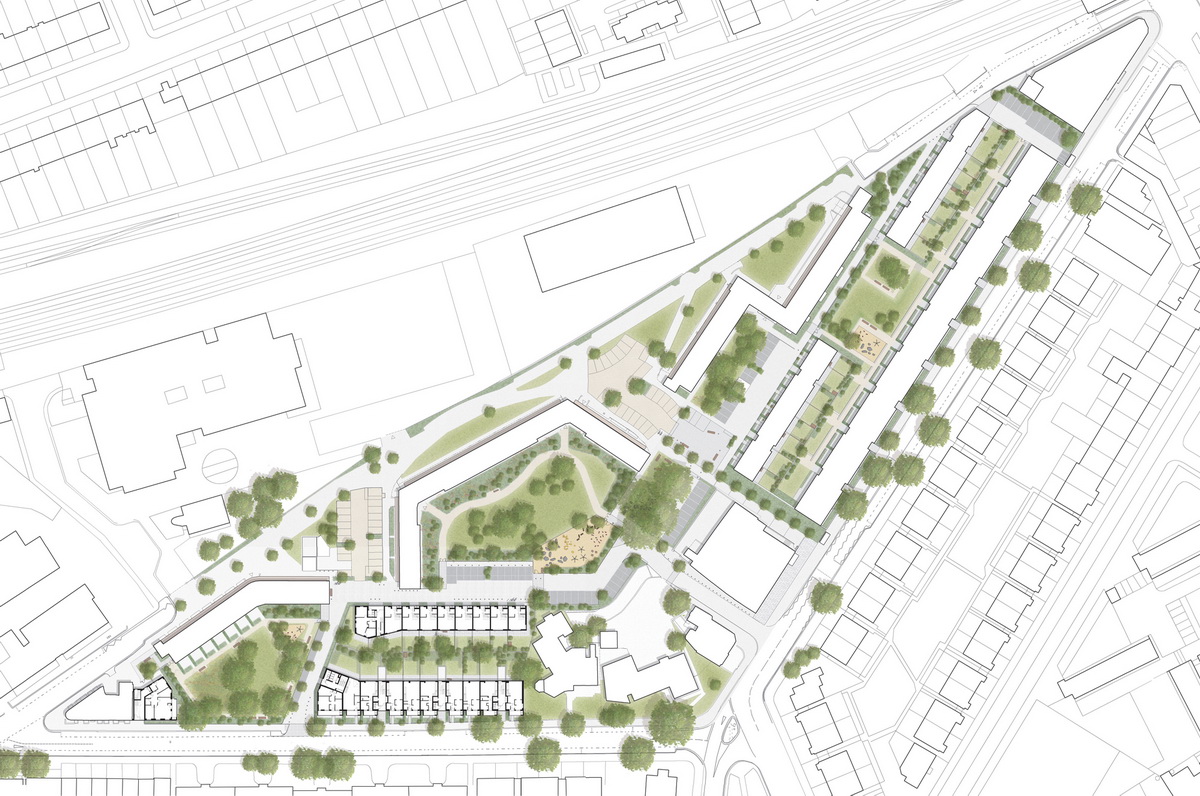 The site plan of the regeneration intervention – emphasis on the Ely Court development.
Courtesy of Alison Brooks Architects

Nelson Carvalho joined the office in 2010 and since then he is in charge of the first phases of the Kilburn development. Having to deal with a derelict neighborhood of London, the architects tried to create a simple but effective link between residential buildings and the surrounding public space. Therefore, the idea of diversifying uses and social profiles of users worked hand in hand with the process of choosing residential typologies and configurations.

The ensemble is formed of three building types which give a new shape to the streets and a green public area that is now permeated by the new pedestrian walkway. The necessity of introducing a new pedestrian route arose in order to transform an empty “green” residual space with a back-yard feeling into a lively park – the garden square as the architects name it – which soon became a focus point in the neighborhood allowing for informal routes to happen within the area. 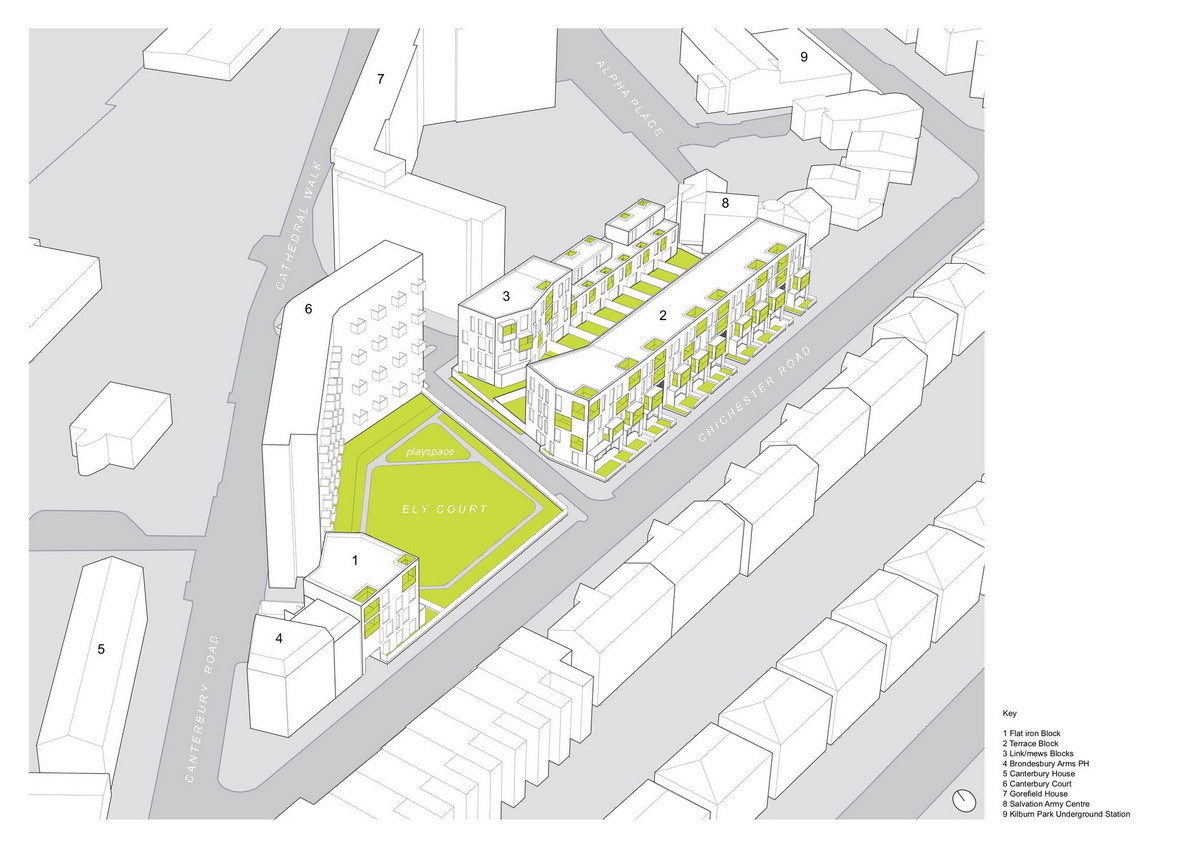 View of the Ely Court Ensemble.Courtesy of Alison Brooks Architects

The two long blocks use a hybrid housing typology coupling two story maisonettes at the first two floors with flats above, whereas the small point building creates the connection with an existing 19th century pub corner building. The link with the street is encouraged both by the direct access to the maisonettes and the separate vertical circulation towards the flats as well, while an overall feeling of community and appropriation is achieved by the appearance of a progressive accumulation of the neighborhood – the hybrid typology offers a heterogenous image of an evolutive building process where the flats above came after the construction of the two-story houses below.  A dissonant element in the urban context is most surely the non-orthogonal lines that draw the architectural blocks – a morphologic characteristic that allows for a higher density to be achieved and specific visual accessibility of the public garden to take place without disturbing the privacy of the neighbors. Moreover, each flat has access to its own loggia of considerable dimensions which constitutes a plus in making the intervention more than a social housing project – as the inhabitants say. 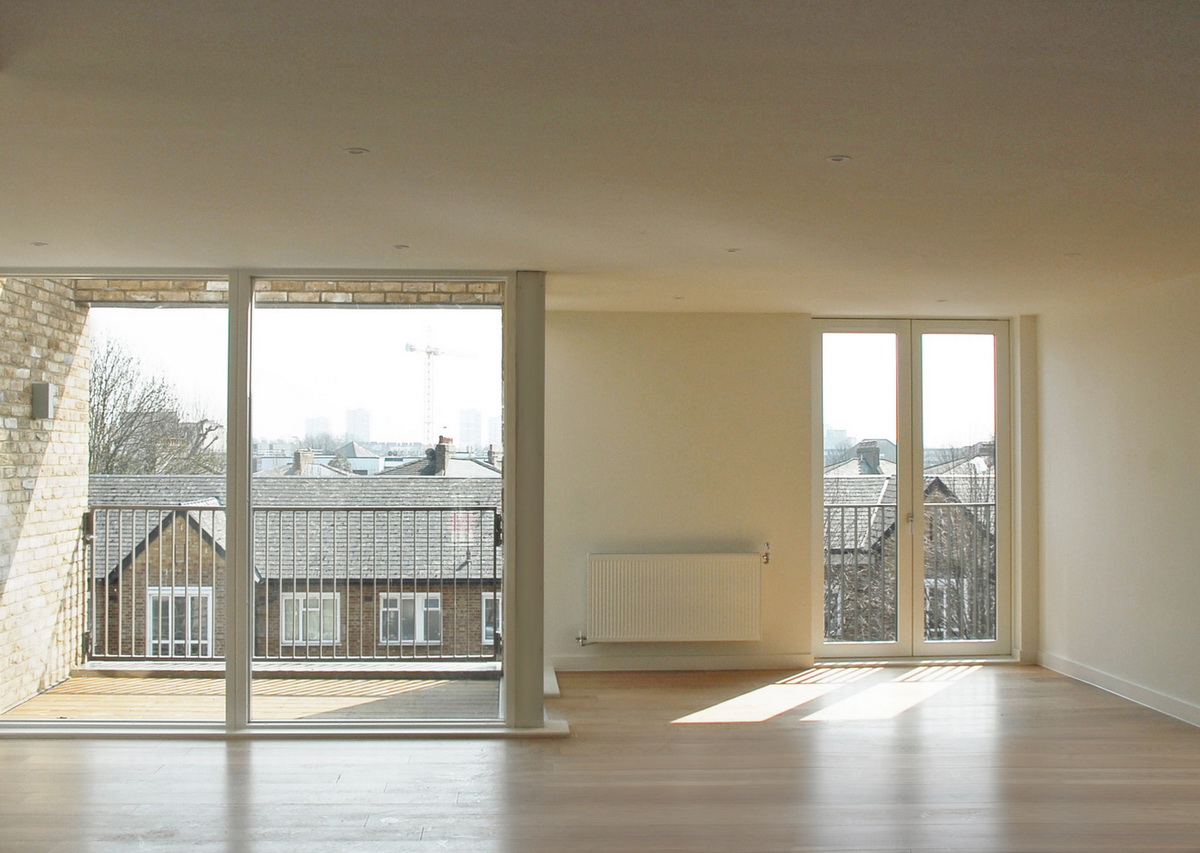 View from inside – the relationship with the neighborhood and the street.
Photo credit: Paul Riddle

This regeneration plan is the result of the cooperation of many different entities having an urban agenda. You can follow its story and results here or you can register for the RIFF 2017 expo-conference and come to this autumn edition of SHARE Forum. This Friday is the last of the promotional registration period so you still have some time to fill in the form – OAR members have free access if they subscribe until the 1st of September!

Until we all meet to welcome Nelson Carvalho at SHARE Forum, we leave you with a sneak peek: watch this short video about the Ely Court residential development and don’t forget to register for RIFF 2017!